It’s been a while since I’ve written a post on baking bread.

Well, to be honest it’s been a while since I’ve made any post but that’s ok! Life happens!

On my days off I love baking bread, especially if we are having dinner with family and friends. My lovely friend Christina deemed it ‘Boom Bread’ which has really stuck. I’ve also been calling it ‘Friendship Bread’ as it seems to keep people wanting to be friends with us 🙂 just kidding…or am I? Either way I feel like I’ve really come to know this particular method of making bread. I’ve gotten to know the process. I’ve learned to listen to the dough. It speaks to me, tells me all of its dirty little secrets. Working with yeast is kind of fun too. You neeeeever reeeaally know how the bread is going to turn out depending on a number of factors like the weather, ratio of flours, what extras you add in to the dough etc. I’ve had a few flops but that’s all part of the process. My hubby always says you can’t always bat a thousand.

I usually bake this bread in a Dutch oven but have also baked it in a standard loaf pan and it has turned out really well. Like a regular loaf of bread but with a nice crusty exterior and an aroma filled soft inside. It makes it easier to slice into proper portions if you’re planning on making sandwiches. There is something special about using the Dutch oven though (not that kind of Dutch oven, sickos). The crust you get is unbeatable. Especially with butter, lots and lots of butter. 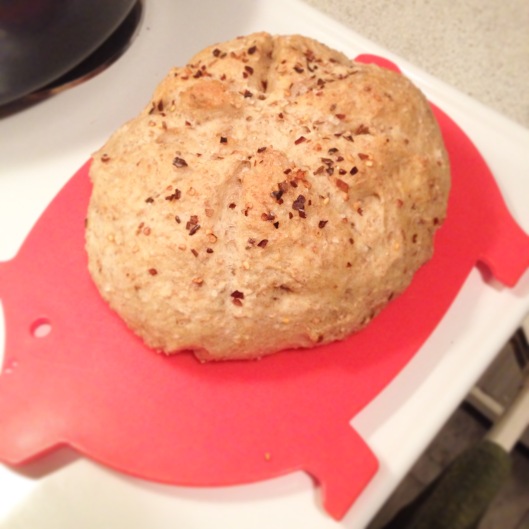 This one kicks it up a notch with chili flakes.

Mix the water, yeast and honey until the yeast dissolves. Let stand for about 5 minutes, or when the yeast has created froth and bubbles on the top of the liquid.

In a stand mixer with a dough hook attachment mix the flours and salt*. Add the water mixture to the dry ingredients and stir, gradually increasing the speed to a low-medium. You’ll need to let the dough and mixer do its thing for about 8-10 minutes. It will go through a bit of a process in the bowl. It will rise up the sides and seem like it might jump right out of the bowl! If it seems too dry add a tiny bit of warm water, 1 teaspoon at a time. Alternately if it seems too moist add flour a sprinkle at a time. The dough shouldn’t be sticking to the sides too much. When the dough changes and drops lower into the bowl mix it for about 2 more minutes then stop. The dough should be sticky and have an elastic quality to it.

Take the dough out of the bowl and put it into an olive oil lined bowl, one big enough to let the dough rise to 2 times its size. I usually just use the mixing bowl from the stand mixer. Cover with plastic wrap and let it rest in a warm place for about 2 hours. After it has doubled its size punch it down. This is my favorite part. Get your aggression out! Cover again and let it rise for another 2 hours. At this point just form it into a ball with your hands, it doesn’t have to be perfect, and place into a parchment paper lined dutch oven or a loaf pan**. Cut a few shallow slices into the top and pop into a preheated oven at 400F for 15 minutes. Remove the lid if using a Dutch oven and bake for another 15 minutes. Sometimes with the loaf pan I have to bake it for 5 minutes longer to get a nice golden crust on it.

* If you want to add any dry herbs or spices to the bread add it to the dry ingredients. Sometimes I sprinkle the seasoning on the top of the loaf before baking.

** If using a loaf pan allow the dough to rise in the loaf pan for about 20-30 minutes before putting in the oven.

Baked in a standard loaf pan and sprinkled with sea salt before baking.

This is the method that works for me pretty consistently now. I’ve added lots of details that I’ve noticed along the learning curve so I hope it helps you as making bread can be quite finicky. I’ve had flops like I mentioned before but that’s all part of the journey. I just love making bread on my days off from work, it’s kind of therapeutic. I probably sound crazy right now but just ask my friends about the bread 😉 they’ll tell you.

Welcome to The Mango Kid blog!

What are you looking for?